“Reality lies beyond the horizon…” That’s been my mantra for over half my life. The saying—yes, with the ellipsis because it proves that reality isn’t final in this moment—came about the same time as my self-appointed nickname “Wonderwegian.” 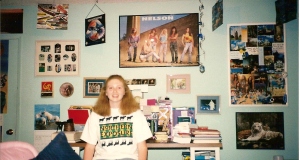 When I was seventeen I dubbed my room WONDERLAND and inhabited my kingdom with Wonderlonians. I’ll omit the embarrassing titles I gave my favorite people but let you know I had everything from court jesters to royal exiles. And Wonderland was covered with pictures of people, places and artwork that inspired me. I even had items hanging from the ceiling! 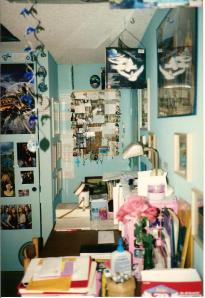 Besides covering my walls with images, I placed several quotes in key locations. Most were hand written in calligraphy on index cards and they were everything from lyrics to writing quotes. One of them stated “Reality lies beyond the horizon… -Wonderwegian.” There was also a paragraph-length exposition on that theme I wrote with the input of my pen pal Justin Williams, but I can’t locate it right now. (However Justin did locate me on Facebook two years ago. Hello!)

I’ve tried to “grow-up” décor wise since getting married and what was once a room-size collage is now crammed onto an 8×5 bulletin board. I’m wondering if increasing the space of visually inspiring images would produce more written work.

What are your thoughts?

Can you work in a room like that (okay, maybe minus the Nelson poster—though it does have three autographs now) or do you need calming negative space?

P.S. If you insist in knowing, I’ll give you one title: Thor was guardian of the realm.

4 thoughts on “Images and Words”