I’ve been all over different websites lately and posting/sharing the links on my social media pages, but in case you’ve missed them, here’s the latest.

This post is a review of my historical novel, Fortitude, by MeLeesa Swann, a newcomer in the world of Middle Grade fantasy.

Then newest is a feature on some of my favorite books featuring Autism Spectrum Disorders on Stephanie Lawton’s blog. (Enjoy contemporary upper YA and New Adult novels, she’s your lady!)

Steven Moore hosted me last weekend with some great questions. Check out his website while you’re there. He’s a fantastic artist (“Mr. Illustrator” from The Inscribables, who drew my “Word Rocker” avatar.) If you love fantasy books, games, etc. be sure to browse his offerings.

And I had another stop with MeLeesa Swann (she’s been great to me) to answer her burning questions.

Thanks for following my  blog journey and  checking out my literary friends.

Be sure to signup for my newsletter because BIG NEWS is coming soon!

I find reading the easiest way to gather information. Those seeking to understand Autism have thousands of books to choose from. I personally enjoy autobiographies by those on the spectrum (like John Elder Robison) and novels because fiction is a great way to learn truths. Movies/documentaries featuring autism are a good resource as well. One of my favorite movies with an autistic character is “Molly” with Elizabeth Shue. That story changed how I thought about people with language challenges and helped me better understand the complexities of the human brain. (Yes, even though it’s fiction!)

My little book, Corroded, is celebrating a year in the wild. April is Autism Awareness/Acceptance Month and today is World Autism Awareness Day: the perfect time to read (or leave a review if you’ve already read it) for Corroded. Recommend it to a friend or family member you think might benefit from or enjoy the story. While what the character Ben goes through doesn’t describe every condition/issue individuals on the autism spectrum deal with, it shines a light on the different ways people experience the world. Knowledge leads to understanding. The world needs people who understand where those who are different from them are coming from.

Indie Bound paperback for purchasing a paperback from a local independent bookstore: http://www.indiebound.org/book/9780997335842

1. The acknowledgement section for Corroded is full of people, but the one that stands out the most is Laurie Halse Anderson. Yes, THE Laurie Halse Anderson. I was blessed to win a full manuscript critique during a fundraiser for the Joplin, Missouri tornado victims in 2011, one of the last full critiques she was able to do. I’ve been in contact with Laurie both before and after the critique and she’s been nothing but supportive. An ultimate mentor—my thanks, again!

2. Mary Weber is the character that changed the most from how she was portrayed in the original drafts. She’s stronger and more relatable than she was to begin with, thanks in part to honest critique partners and beta readers who shared their displeasure of her with me.

3. In both of my books, my secondary characters vie to over-run the main one, and Corroded is the ultimate example. Ben Thomas was so well-loved by beta readers and my critique group, the story finally morphed to include his own point-of-view chapters.

4. Ben’s sensory issues are influenced by the sensitivities of several people on the autism spectrum including my son and the autobiographical tales by John Elder Robison, Temple Grandin, Donna Williams, and Erin Clemens (who the book is dedicated in part to.) But Ben’s story isn’t a one-size-fits-all autism story. Autism is a spectrum disorder. Each person on the spectrum is unique and lives with a different set of skills and sensitivities, just like anyone else.

5. Weighted blankets can help calm people on the spectrum and other individuals with sensory-related issues. Does it work for everyone? No, but it’s worth trying because it’s a safe, drug-free option to ease anxiety and quiet meltdowns.

6. Ben originally had one obsession—The Avengers, with a focus on Thor because I’m a Marvel girl. As his role expanded, he became more complex with his interests and the history geek emerged.

7. The town in Corroded, Santo Cordero, is based on the Rio Del Mar/Aptos area in Santa Cruz County where I lived during high school. The school I attended had a Mariner mascot—that’s where the idea for Sailor Suzy came from.

8. There was a place on campus called “the pit.” Photographic evidence: that’s me in the middle, rocking my flannel shirt and white moccasins in 1993.

9. I found the Steinbeck Wax Museum on Cannery Row in Monterey totally creepy when I went there, but what else could you expect from a wax museum in a basement? It did not disappoint, in that regard.

10. I have two older sisters who are much cooler and more interesting than me. While growing up, I almost always shared a room with one of my siblings, but I did have my own room for about two years before my sister closest in age moved back in and I was forced to share my space. I played up those two experiences for Mary and Barbara’s relationship trouble.

Today is one of those controversial days, this month sometimes less than joyful.

There are some in the autism community that despise this month, this day especially, because they don’t agree with some of the organizations that have over-run things with their own agendas and publicity. No matter what some groups have done, this month is still be a great opportunity to share your stories—whether your own or your family’s—and bring to light the joys and frustrations of life on the autism spectrum.

Today, I’m wearing blue, and all month I’m sporting a bit of blue hair and an Autism Awareness ribbon. These visual tokens give me conversation starters to share with others about my own family’s journey, as well as direct people to great advocates on the spectrum like John Elder Robison, Dani Bowman, Erin Clemens, and A.S.P.I.E. 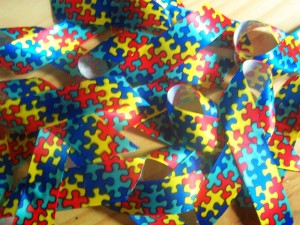 Over the coming weeks, I’ll share a few more autism-related posts (including literary news you’ll want to stick around to hear.)

As for the other worthy cause, National Sexual Assault Awareness Month, I highly suggest reading Speak by Laurie Halse Anderson. Several different times she and her publisher helped raise money for RAINN in April. One year I donated to RAINN and Laurie, in return, donated to Autism Society of America. A win-win situation of awesomeness.

Now I’ll branch over to the National Poetry Month. Here’s a haiku I just wrote about some of the feelings one might deal with on the spectrum:

All thoughts are spinning
Mind, body, crowded senses
Breathe, wrap me in weight.

What are you passionate about this month?

Yesterday I attended my first autism conference. I’ve gone to workshops and support group meetings, but never a large event. It was three days, but I could only make it to one. I chose the final day because John Elder Robison was a presenter. Yes, that means I missed the iconic Temple Grandin, but I was not disappointed. Not in Mr. Robison anyway. He redeemed the emotions and interest that the first speaker lacked/lost.

Back to the beginning… I started off early and drove to The University of West Florida, just me and my iPod with the “Wonder Rock” playlist on shuffle. (Translation: lots of Europe, Boston, and Mitch Malloy with a sprinkling of other assorted rockers prominently from the 1970s-1990s.) The campus—sprawling with space between buildings and acres of natural landscape left in tack—was lovely and the fact that their logo has a nautilus was, in my mind, a nod of serendipity to my adventure.

Mr. Robison was hilarious and thought provoking. His passion for sharing his stories (Hello, three books!) shined as well as his social quirks—like pacing around the stage when his family was doing their Q&A. And his family was great, too! Lots of insight and they answered a question for me: What’s the value of getting an Asperger’s diagnosis as an adult? (Which now, with the new DSM-V manual, would be “autism” since the Asperger’s label was removed and it doesn’t differentiate between the levels on the spectrum.)

I’m leaning toward Mr. Robison’ practical response, though greater peer acceptance and an official credential would be nice. The liability/cost of medical/life insurance when you are diagnosed is greater. Let’s hear it for logical thinkers!

One tool that Mr. Robison recommended was an Autism-Spectrum Quotient test that was posted by Wired magazine many years back. I took it and tested forty-two. No surprise to me. My husband scored seventeen—we’re a case study in opposites attract.

The conference was educational/life affirming. Lots of Aspies to hear from and several things were reinforced to me about what I can do to encourage my ASD son in his growth. What, you ask? Never give up because learning and development continues into adulthood and let him follow his passions/obsessions. Plus, I got two books autographed but I was too shy to ask for a photo.

I’ll diffidently go to another event where any of the Robisons are featured speakers. The day was well spent but I’m curious to see how my friends score on the AQ test. Leave your number in the comments if you’re feeling brave.