It appears there’s been a flare-up in the war between SAHM and working moms.

And my favorite out of the recent stories:

I’ve been a working mom but more often a stay-at-home mom. I now consider myself a work-from-home mommy, though I haven’t sold/published anything for more than a year (because I’m focusing on my novels.)

I could list facts about all the work devoted mothers do from their homes—both for their children, spouse, and others—but it’s all been said before. Or I could mention the documentation that’s been done showing that SAHMs are worth over $112000 a year for the work they do. Wouldn’t that be nice, especially since I homeschool there’d be probably be even more compensation.

But it seems like the attacks on Ann Romney are more of the “class warfare” that’s spreading like a disease the past several years. So-and-so paid less taxes than those working below them. Don’t up the tax percentage based on income—make taxes the same percentage for all so the people making a million will be paying more than the people who make thirty thousand. The tax codes are broken so please don’t begrudge those who have been successful—look at the motives behind those who wish to tell others what to do with what they have.

The years I spent in middle school were terrific and terrible. I was trying to find my style and express myself—the slightly pudgy, tall geek posing as a rebel. (Yes, it carried over into high school, too. And adulthood, minus the rebel part.) And no, I didn’t fool my friends or family. 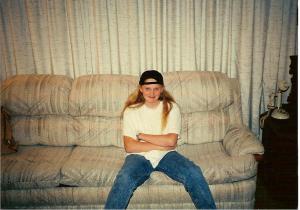 I took gifted/advanced classes in a four-track-year-round school in a culturally diverse neighborhood in Southern San Diego County. I was the tallest girl in the school and blonde amid a sea of dark hair. (Translation: You could spot me across the campus with ease.) I went to all periods with the same group of people for two years. The exception was the elective classes—those in band went to the band room and the others (me included) cycled between art, cooking, computers, health, drafting, and wood shop each quarter. It was a solid, well-rounded experience.
My group was the popular clique amid the nerds and all the cultures at the school were represented. Only the truly weird kids were the odd ones out. The other three tracks in the school—one would be on break for a few weeks at any given time—had separate lunch schedules and we didn’t mix socially. Thus, I was in the privileged top of the (geek) social class.
Switching middle schools in my final month of eighth grade did a number on my self-esteem. That last month of school (actually moving on my fourteenth birthday) my family moved to a predominantly white/upper-class area in North County San Diego and it shook my sense of self-worth to the core. Less than a thirty minute commute, but it was a radical culture shock.
I had to ride the bus, which I hadn’t done since elementary school, and the trips were worse than the actual school day. (I tend to think this is when my fear of crowds kicked in.) It was packed full of jeering kids who made fun of those of us who got on/off the bus in my neighborhood—it was one of the older, original parts in the suburb. Most of the other kids on the bus route lived in new tract housing with a minimum of three car garages, five bedrooms and 3.5 baths. People would actually try to trip me when I walked down the aisle and projectiles were thrown in my direction.
The school days were disastrous. Wood shop, which I loved at my old school, was torture. Even the teacher looked at me funny and said “it’s not like it was in your old school” when I walked in the first day. He offered to let me change my schedule to drop the course, but I naively stuck it out. There were only two other girls and they were in there because it was “where the boys are.” I was branded a hoe for taking shop class because in that school it was for guys and skanks.
I’ve blocked from my memory which class it was that I had notes stuck on my back taunting “wide load” and such on several occasions. It was always from the under-sized boys who must have been intimidated to have a girl sitting in front of them that could physically beat them up—as if I’d ever. One student did defend me, but the damage was done.
In another class, I was trapped on the back row between the 90210 looking kids. They’d discuss their parties and drinking/drugs from the weekend before, where the next one would be held because so-and-so’s parents were on a cruise, who spent the morning puking in the bathroom, who was in rehab, or who might be getting an abortion.
There I was, on the “better side” of San Diego, and I was being exposed to bullying for the first time. Plus the exploits of the privileged class piled around me—those outwardly perfect kids spiraling down the dark hole of addiction before reaching high school. It was frightening and sad, even then. I didn’t envy them. They made me sick just listening to the stories they joked about. (I think that’s where my distrust for seemingly perfect people stems from. Even in books, I never trust the pretty boys. No Team Edward here.)
Then, there’s the fact that on the first day I dressed out for P.E. I was picked last when choosing baseball teams. (The first, but not the final, time I was left for a coach to assign me to a team.) I busted myself to prove I wasn’t all that bad. I barely made it to first base and later sprained my ankle running home. I had to hobble around for a couple weeks on crutches.
I sat the whole boring 8th grade graduation (the only time I walked for a grad ceremony) surrounded by strangers. The next day, I attended my old school’s graduation and watched my close friends get their diplomas as a bystander, sitting with their parents and siblings rather than with them on the stand.
It sucked to be me.

Over the summer, and then when high school began, I did settle into a small friendship circle of other outsiders and new comers. I was no longer bullied—but mostly ignored, which was fine by me.
Three months into my freshman year—just six months after the last move—I was once again relocated. This time the destination was eight hours north, to a strange place near Santa Cruz.
But that’s another story.
Follow carriedalby.com on WordPress.com