My number one bucket list item is officially checked off: I attended my first Europe concert this past weekend. It only took twenty-five years and nearly a thousand miles of driving, but people have always told me I’m patient.

Photo by my husband.

Yes, Europe is in America, at least for a few more days. My family and I made a road trip to the in-laws in Illinois (post about that soon) and after a few days of visiting, my husband and I left the kids with the grandparents and drove two and a half hours over to Indianapolis to catch Europe’s show at The Vogue. The venue’s neighborhood is an awesome mix of restaurants, local shops, and good vibes along the river—a great place to walk around and people watch.

We got there early and I had fun talking (well, mostly listening) to the other diehard fans that were lined up. Listening to the stories of the blue collar Mid-west rock fans was great, and there was even a guy from down under in the group. The experience reminded me that I need to get out of my usual circle of book nerds, homeschooling moms, and church friends and expose myself to a wider variety of people more often. It’s good for the soul. 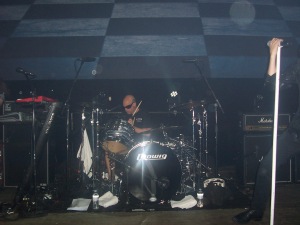 And so was the music!

Being third in line landed me a center stage spot when the doors opened. Before hand, I couldn’t decide if I wanted to be stage right, near John Norum and his guitar skills, or stage left, next to the bass (John Levén) and keys (Mic Michaeli), but since the stage was small, I opted for center. That put me first row, in front of Ian Haugland’s drum kit and Joey Tempest’s microphone, when he wasn’t moving around with it. 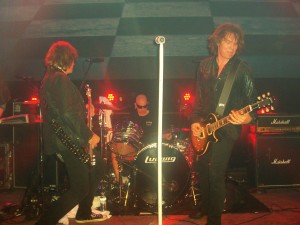 Plus, I was in the middle of the vertically challenged. But when you wait twenty-five years to see your favorite band in concert, you don’t feel bad about blocking people’s view. The show was fabulous! I’ve never gotten front row before, so that was a bonus, but I also got my first guitar pick—the leader singer/guitarist pressed into right into my hand. Thanks, Joey! 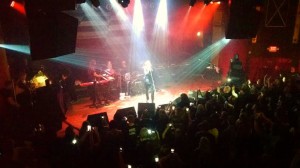 People need to put down their phones and watch concerts live, not through a screen. (I took less than two dozen pictures during the whole show–too busy enjoying the moment.)

I’ve gotten notes back from two more beta readers—as well as one literary agent who turned down FORTITUDE. Now, I’m back to writing and editing to strengthen a few things before the next round of submissions/queries.

To help this creative groove keep its momentum, I’m listening to a lot of music. (Something I talk about a lot here.) In the car, my iPod played Europe on shuffle for about a week straight. My eight-year-old knows who Joey Tempest and John Norum are. They have so many great songs spanning thirty years and the music got into my head. The other night I dreamt about turning Europe songs into books—with the band member’s permission (in person, of course, because it was a dream.)

Today, I switched over to Boston. I’m sure space-themed dreams will follow. It’s happened before—and spawned a manuscript.

What do you do to feed your creativity?

In Which I revert to Rambling

I put a call out for blog ideas on my Facebook page (www.facebook.com/AuthorCarrieCox) the other day. The two options listed are difficult, to say the least. One humorous, one serious. I might tackle them at a future date, but I need something fluffy to get me through this week.
Music, as always, pulls me into the writing zone. I was productive last week, which was good since I needed to produce several pages to submit for my critique group to read. I went on a musical binge and piled 196 songs into a “Fortitude Groove” playlist in my iTunes account. Those were just songs that jumped out at me while scrolling through my music library. I’ve narrowed it down to 150 songs so far. I’m listening to each one while working on Fortitude related tasks: note taking, editing, writing, and playing Free Cell to zone out before/after writing. It will be awhile before I create an actual “soundtrack” (see http://wonderwegian.blogspot.com/2011/08/corroded-soundtrack.html) because I’m never quite sure if the story will keep to my outline. I’m already rethinking the ending and I’ve only written two chapters. But, for now, the music is doing its job.
Down to 149…
This time, the selections are heavy on the Irish/Celtic, country, blue grass, and my hard rock favorites.
… 147…
I don’t think I could write something without being inspired by at least three songs from the likes of Europe/Joey Tempest/John Norum, Mitch Malloy, Nelson, Tyketto, or Firehouse. Just to name a few. Those are the songs that filled my boom box when I began writing in earnest at 14. And several of those guys have fabulous new albums.
… 145…
Some terrific songs are being deleted because of modern references, like phone calls or cars. Just like Bid Time Return (aka “Somewhere in Time”) I don’t want anything that might jar me out of the moment. Timeless is perfection. That’s why I LOVE the classic Disney cartoons—the ones when Walt was alive—there aren’t any “modern” jokes thrown in. They are truly timeless masterpieces: Sleeping Beauty, Alice in Wonderland, Peter Pan. I enjoy Robin Williams as the genie in Aladdin, but most of the humor is current references. Pulls me out of the story.
… 143…
Fluffy just turned into rambling so it’s time to stop.
Any other bright ideas out there for future posts? Remarks on this one?
Follow carriedalby.com on WordPress.com